A musical journey from Berlin to Los Angeles

In the ’20s and ’30s of the last century a new music world developed that  immediately worked itself into the everydays: the jazz. Its effect could most strongly be felt in the New World, since jazz pubs were opening on every corner, people were going out and dancing, they were listening to the melancholic, bittersweet melodies and admired how prominent musical personalities narrate their thoughts about the world and themselves without words with the help of music.
The protagonist of the Subotica production is Marlene Dietrich, the cultic, rebelling feminine ideal (she inspired the clothing collection of Andrea Ledenyák). Through her character, we trace the important stops in her life from Europe to America, the homeland of jazz. In America, Marlene barges into personages characteristic of age, and finally arrives to Hollywood, the citadel of showbusiness....
More and more famous songs are intoned, variety is open 24/7 until suddenly the world is taking a completely different turn... 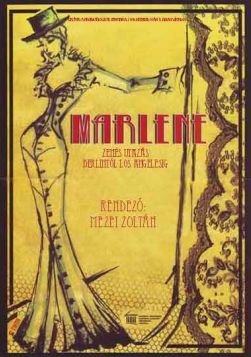