On the basis of Endre Ady’s correspondence, poems and novels,

with the use of György Bölöni’s, Zoltán Péter I.’s and Endre Czeizel’s works

You are my wakefulness, my suffering and joy. Can you see, feel how much I love you? I love you so much. So much. And my fate has to be solved very soon, because I can’t live like this. You appear in front of me a hundred times at night, when I’m alone, and I want you and I kiss you a million times in my dreams. I kiss you, hold you tight, I’m inside you with my desire in every minute, you sweet woman, the one and only...
…
Have we been going out together or have we ever gone to Paris together, to our Paris that is squirming in pain now like a libertine dame choked by her pimp? If we strolled the City together, to which we must forgive as Christ had forgiven Magdalene, let us not forget each other. And let’s not forget that Paris was a bandit, just like love, but man has never got a more beautiful gift than love, and Paris indeed was the new Athens. How it hid me, how it intoxicated me, how bad it was, and how exhilarating: the shadows of its obscure corners and grotesque people now become sanctified.

We watched the Adieu, Bandi biographical miniature in the Soltis Lajos Studio of the Subotica National Theatre – a tale, on tiptoe...  The theatre sloped off into the autumn, squawkingly crying... and it froze on the dead fallen leaves.
...
Andor Kovács Nemes orderly portrays to us the constant internal and external incandescence, the near explosive state, with a consuming passion...
Zsuzsa Kalmár... Zsuzsa Kalmár, let her name stand here twice: she is the Woman, Isolde and Lady Macbeth at the same time, Ophelia and Lukrezia Borgia. She totters into her defeat, loses her absoluteness only sporadically, she is a spoiled lady and a vamp, a street slut in one person. Her performance reveals the incomparably many shades, tasks, distresses, wonders and possibilities of female existence, and the actress owes us only what the text still remains in debt with. Csaba Ralbovszki is the mythological cuckolded husband. He constructs Dodó from pain, dignity, buffoonery, everything transforms into tender forgiveness in him. We couldn’t take our eyes off him, his every gesture represents a study.
- Zoltán Barácius, hétnap.rs

... The performance tells a story that, on a basic level, has innumerably been repeated: a man falls wildly in love with a woman who is married a little (true enough that in a bilateral marriage of convenience), but that does not prevent her from returning the love, therefore an awkward, eternal triangle-situation develops that is full of fights and reconciliation and that eventually ends with the break of the lovers. And the piquancy of the affair is that the man in love is one of the most significant men of the age and of Hungarian literature in general, Endre Ady.

The story itself predestinates this relationship going on partly in front of the whole world – that neither Ady-literature, nor human curiosity do not release from their grips – to become a drama. The only question is what to be used and what to be left out by the writers since the supply is so abundant that however they decide, there is plenty for an intriguing drama and most assuredly, there will be residues. This is what happens in Subotica as well. Those who are familiar with publications about the love of Ady and Léda complemented with the role of Ödön Diósi can acknowledge it with a pleasant sensation, and those who are lacking previous knowledge receive it exactly as any eternal triangle-situation shaped into a drama. What is common though in both cases is the experience of depiction – the theatrical quality of the performance.
- László Gerold, criticailapok.hu 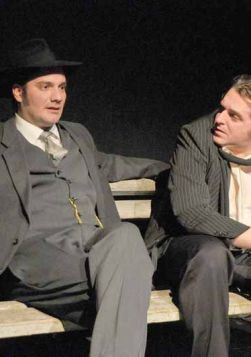 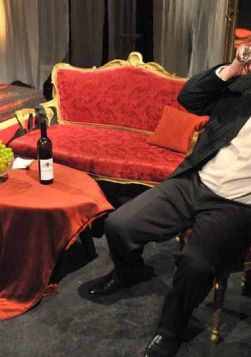 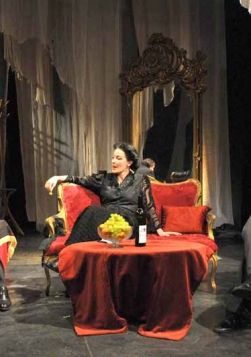 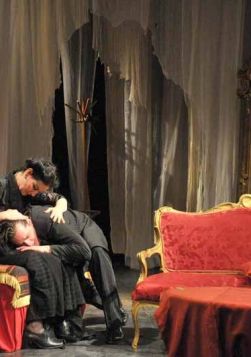 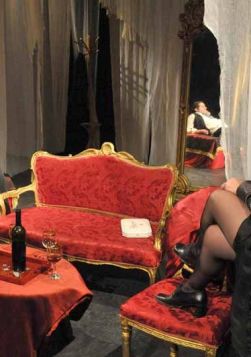 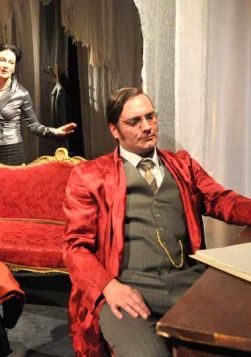 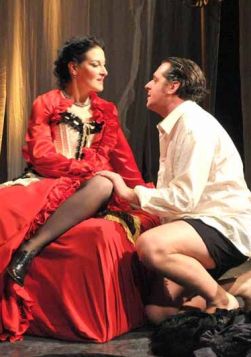 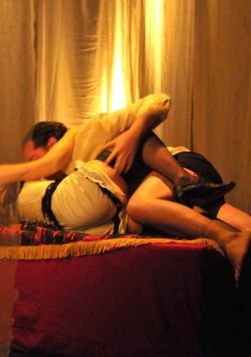 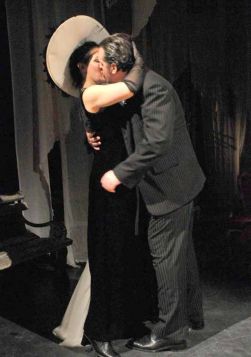 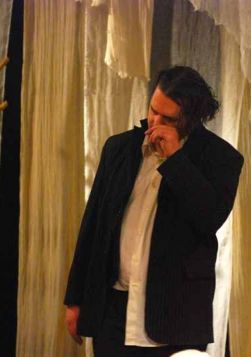 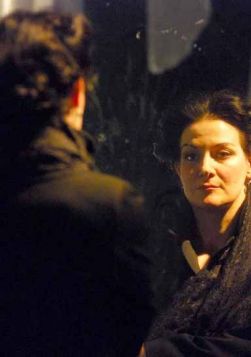 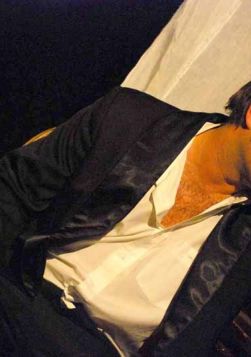 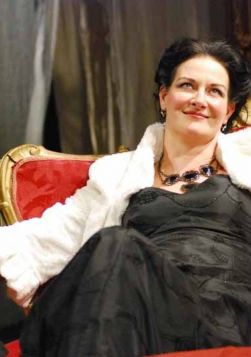 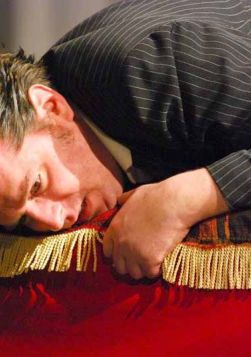 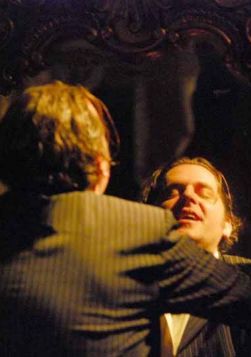 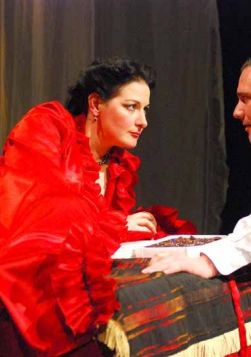 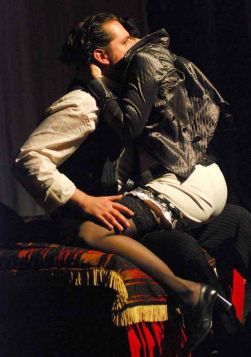 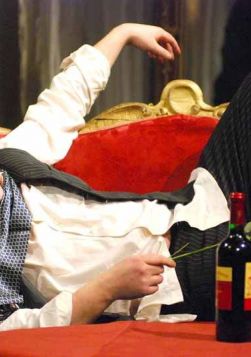 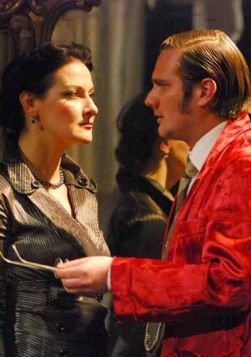 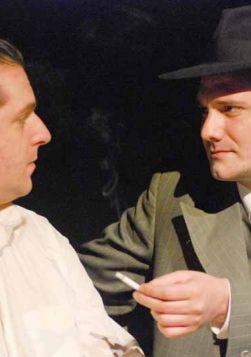 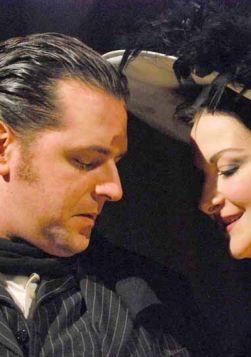 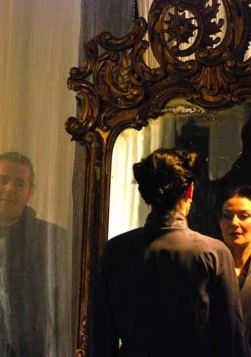 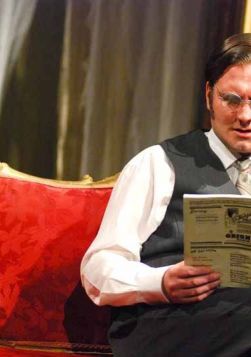 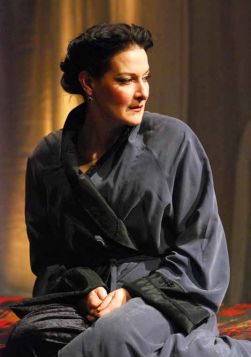 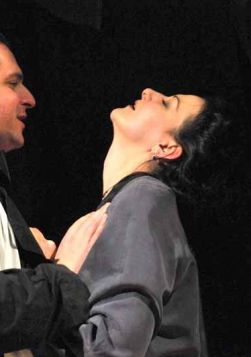