Stars
I stand up, I don’t stumble anymore, I don’t stamp, I’ve found my legs and I occupy this foothold, my place on Earth, this centre that is mine, my own centre of the world, this world of kitchen tiles, this is the point from which I measure everything, the whole shebang into which I wandered for a blink, this time and place is equal almost to nothing, but it’s mine. I am just the same as anyone else in the world, and I’m still a unique specimen. I’m standing here, naming myself, I’m Lajos Banda or aunt Rosie, Pityu or Krekács, Vízike or Jani Neighbor, Bérczes or Háy, anyone, anyone, maybe even Géza-Boy. I’m turning around, watching, looking at the world, at my companions in it, they are also turning around, watching, everybody in its own centre, everything and everyone in its own place, there’s peace and order.
The Sun rises, we get up, have a wash-dress up-drink coffee-say goodbye, snarl at the barking dogs, good morning, we say to the others in the village, the town, the high life, we work, we dig-write-assemble-sort, then we snuggle into pubs-coffee-bars-theatres-televisions when coming home, there’s peace and order. The next day is the same, and the third as well, and the following half-year and it’s always the same, always. We love-cheat-divorce, caress-bite-punch-hug, inflict wounds and get the same, time trudges, we are tired-indifferent-aching, our innocence is gone, our place in the world seems to get lost, we don’t know where we are anymore, why do we exist, we wander hesitantly, creep and crawl, stand on tip-toes up to the skies while holding to our hair, we plop back, look for the lost and never really found centre, our own from which we measure and understand the world. We crave for the other’s look in which, however, there’s the same helpless despair and the same question: what’s the point of the zero time and place that is ours, only ours, and where is our place in it when everything seems to get lost?
We are watching Géza, the faulty Géza-Boy, who is one of us, the one who is courageous instead of us, the free man enslaved into his own prison, we are gazing at the infinite sky interlarded with stars together. We are sitting together in silence, and we are waiting for the answer from someone. We are standing, waiting, saying nothing, hoping, an end-of-world accordon is squeaking. The night has fallen.

I thought, if I’ll once write a play then I would write about real heroes. I try to avoid the urban wirtschaft. (?) (Who cares about urban people? I don’t) The tired and despered wives, the husbands in their mid forties, searching for cheap lovers, the uninteresting kitchen scenes, then in the bed: do you want me? No. Neither do I. Who will be my Hamlet, my Lear, Macbeth and Othello? Who could be my hero? I was thinking desperately hard (and I look so silly when I’m thinking desperately hard...) I must have been walking with that silly face when Lajos Banda and Pityu Herda stepped out of the pub. Pityu was explaining to Lajos that this world is so fucked up, it couldn’t be more fucked up, because then it would blow up. There is that Little Geza too, he said. What had happened to him. I was looking at Banda and Herda, how they where talking about Geza, Little Geza, although they  weren’t dressed like characters in Greek tragedies and their dads weren’t kings or princes, they were real heroes. They wore shabby work coats.

We can almost bite the air diffusing from the meaninglessness of existence that the performance built into the scenery reflects through the elliptic, closed nature and the hopelessness of the village and the world… Ervin Pálfi portrays this half-conscious, half-unconscious, existential anguish remarkably fine, and in his interpretation, the autistic character of Géza is free from every affectation

The story is real and transcendental at the same time. From this dualism, the text receives a strong, defining philosophical load... The autistic Géza-Boy represents the case of the person being lost, who is forced to live under the most realistic circumstances, whereas he has nothing to do with reality. Ervin Pálfi is "acting out" this.
- László Gerold, ellenfeny.hu

Staging of László Bérczes is pioneering first of all in a scenical sense. He built a scene on the stage -more precisely arranged it to be built by designer Sándor Sárkány-, in the middle of which, at the top of a ladder, the autistic leading actor is enthroned, in a symbolic sense like a God, .. The interpretation of Bérczes does not end at this ironic image. Like Háy’s workers the stone, he extracts from it the philosophy of the interpretation of existence.
- Tamás Koltai, szinhaz.net

The performance in brings into the limelight the more sensual side of the drama, it unwraps the thought from a direct sensual experience... In the deepest, middle part of the space on a single, swivelling stand, the kitchen tiles and the kitchen table are united, and this is where Géza-Boy’s stone-watching, that is, divine height accessible by ladder rises above the whole auditorium, and the dogs are painfully howling, signalling something not known. They almost say more about Géza-Boy’s inextricable dilemma than when the leading actor utters the tormenting philosophical question of the all-observing but not intervening God. The effect is immensely strong already. The staging is conscientious and inventive, the interpretation of the leading actors is sensory and prospect opening at the same time.
- László Zappe, nol.hu

Rarely is there a performance the stage-set of which is so infiltrated by the philosophy of the play.
- csaba pressburger, pressburger.org

Háy’s play blossoms in László Bérczes’s staging technique that is always in the quest of the subsurface layers and motives. In the play, a brief episode of the life of an autistic young man appears to view, one that is comprised of integration disorders... Ervin Pálfi’s all-intensive and precise performance is a rare gift: Géza-Boy is perfect. In the role of the mother, Natália Vicei shows the sadness of love, but luckily - she is not willing to sink into melancholy. And so many perfect character formations: the bad girl of Hermina G. Erdélyi, the workers of Árpád Csernik and Attila Mess, Frigyes Kovács’s "arguer" drunker and the others also performed on high level – it was a great experience.
-mancs.hu

Intelligence is not necessary for living, it is needed only to bear the endless loneliness that follows the catharsis. Or the complete absence of this loneliness. Catharsis is thus a disappointment, those who yearn it must know what comes next. It is a suicide to be God with a red button in our hands, it is a game with the thought of death, the uplifting moments are necessary for us to carry ourselves away and to possibly push the joyful lie that ensures circulation.
- Réka Fekete, undock.hu

László Bérczes exhorts the actors to an inner play. The depth of the soul unfolds in every interpretation in the staging that is confined to the most important props and "scene-corners". With the idea of the steep stand enfolded by a tiny platform and the restrained interpretation of the actors, the depths of fates come into sight in the spirit of psychological realism.
- Katalin Metz, magyarhirlap.hu

Thousands of tiny events of life organise themselves here into a severe dramatic conflict in a way that they display themselves to be insignificant the whole time. János Háy’s theodrama and László Bérczes’s staging makes visible exactly this "nothingness", without distorting anything with this display. The strength of the company from lies precisely in the same: the actors, without exceptions, form their roles to be authentic with cathartic directness and simplicity. These performances are realized in small gestures, interrupted accents, changed looks. The performance builds from micro-situations that are made grotesque with realistic but acrid humour.
- Attila Janisch, kulturinfo.hu

...And for example, what the bacon chaps represent for Lajos Banda and the bread and butter with bologna mean to Géza-Boy, what’s that to me?, and the alcohol, the cigarette to Steve Herda, the scabby piano accordion to Sappy, what’s that for me?, this time, I am mumbling-examining this, because with the company from Subotica, Bérczes ultimately forces me the to think about that...
- Róbert Markó, journals of Kisvárda

The starting point of László Bérczes’s painful and funny, innocent and wise performance rich in simplicity is the "faulty" Géza-Boy, who is from among us, a free man slaved into his own prison, and the questions he poses with naive valour: what use is there of the no time and space that only we possess, where is our place in it when all of it seems to be lost? ..., questions that we expect to get answers to from someone while we are casting up our eyes full of hope to the starlit sky.
- Mónika Kiss, poszt.hu

...it is full of tiny beauties, fine movements, vibrations. We watch them and we die because they are so bitterly heart-gripping, at the same time, we would run to them to for a hug.
- Tímea Papp, fidelio.hu

The performace is neat, beautiful and very sympathetic. One of the explanations for this is probably the fact that László Bérczes layed his hands on the work of János Háy very gently, tenderly and with respectful delicacy. He turns to the protagonists with sympathetic love and this is of service to the play. A perhaps even more significant factor is the authenticity of the company from . Not only does the delectable speech of the people of Vajdaság suits The Géza-Boy extremely well. Also, the actors seem to stand closer to life and reality than their colleagues within the borders. And they make this impression of ours even stronger with their unified, harmonious, consistently high levelled theatrical work.
- Andrea Stuber, szinhaz.net

The Festival of Studio Theatres in Eger, 2009
-one of the four equivalent first prizes

“POSzT” - National Theatre Festival in Pécs, Hungary, 2009
- the performance received the 'Rivalda' Award of Thalia Theatre
- Ervin Pálfi received the award of the Fidelio Est magazine for the best actor under 30

DESZKA - a Festival of Contemporary Hungarian Plays and Theatre, 2010 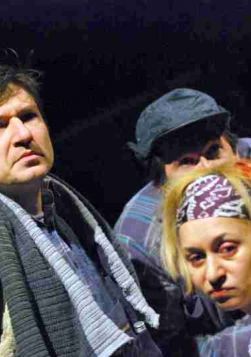 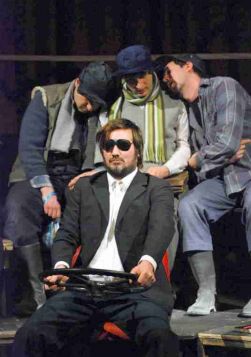 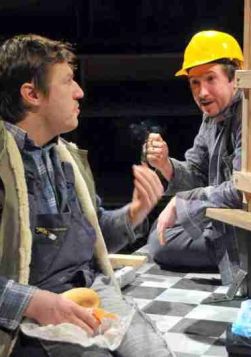 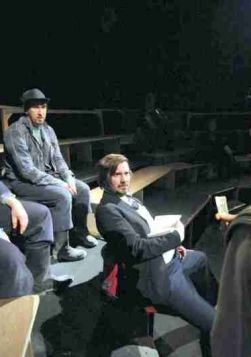 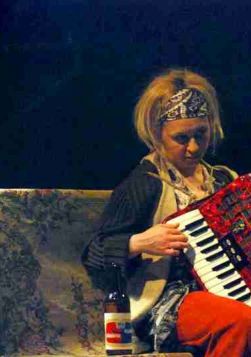 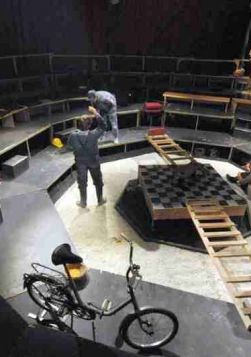 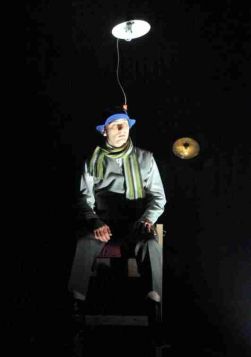 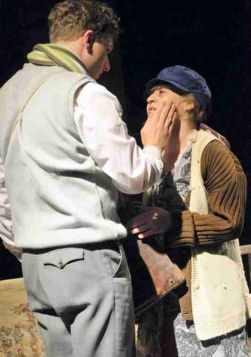 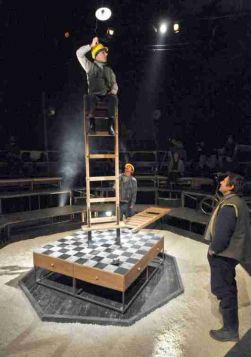 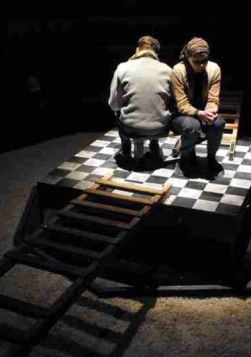 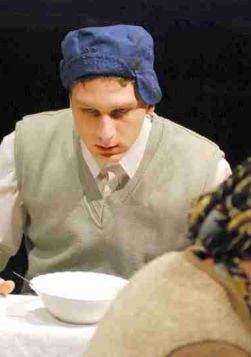 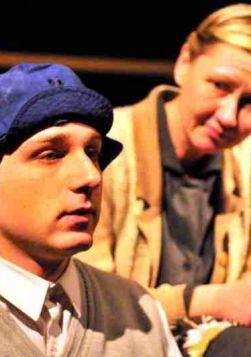 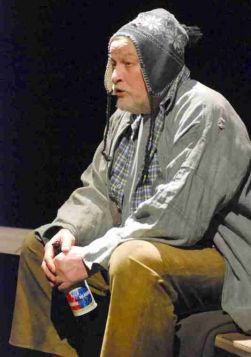 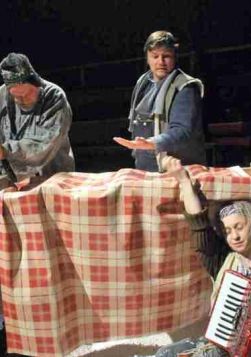 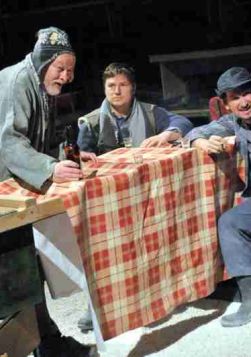 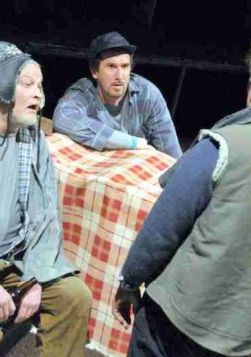 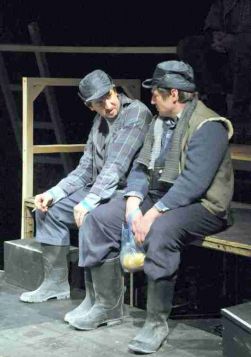 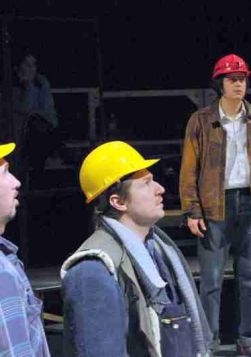 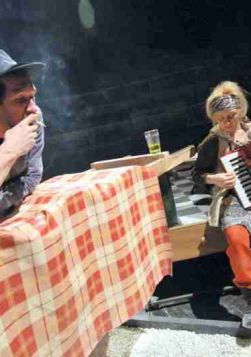 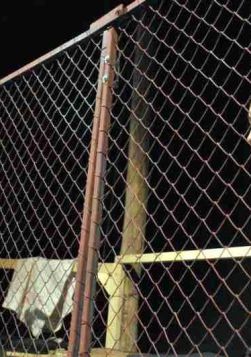 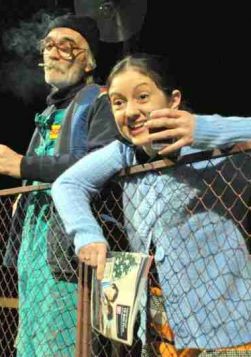 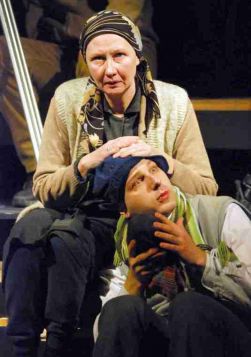 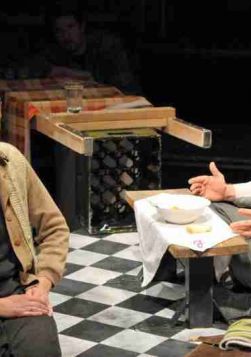 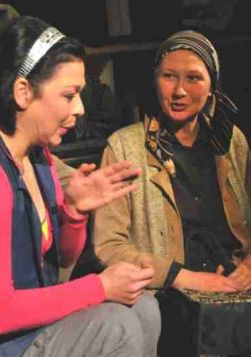 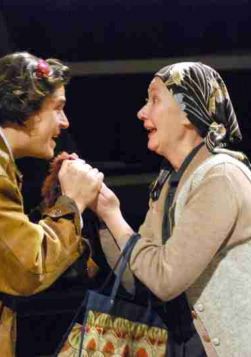